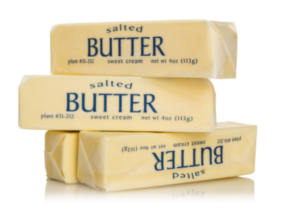 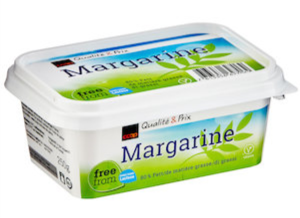 In our home margarine is not found, you will however find real butter. Today we are so obsessed with weight loss that we often throw good nutrition out the window. Recently I read an article in the June 2017 National Geographic titled “Pandora’s Lab”. This article is an excerpt from the book Pandora’s Lab written by medical historian Paul A. Offit, M.D. The Article is one of seven cautionary tales from the book. This one particular tale focuses on the breakthrough invention of margarine with the opening quote from the Author Paul Offit “How does a scientific breakthrough become a scourge of humanity? As easily as margarine supplanted butter—and introduced dangerous trans fats. Even the most promising innovations can have unintended, sometimes lethal, consequences.” I want to share with you this article that answers which is better butter or margarine.

In the 1960s there were several people, including doctors and scientist, who argued that the reason Americans were having health issues like atherosclerosis and heart disease had to do with cholesterol and fats. There were many committees with the U.S. federal government that wanted to clarify the scientific data between fat consumption and human health. “The problem was that most of the policies were conceived by political activists with no training or expertise in nutrition … The USDA recommendations were clear, even if the data wasn’t. Restriction of dietary fat became government policy.” says Offit. This led to a margarine boom.

Government agencies in the 1980s started attacking saturated fats (butter, lard, coconut oil, palm oil, dairy, animal fats) as heart unhealthy. Americans were told to replace saturated fats with unsaturated fats. They were told to eat margarine instead of butter because it is heart healthy. Due to the misinformation and many other factors, by the 1980s, partially hydrogenated vegetable oils were popular for baking and frying and saturated fats were vilified. Suddenly margarine, which contains 25 percent trans fats, became the “healthy alternative”. In 1911 the average American ate 19 lbs. of butter to only 1 lb. of margarine per year. By 1957 Americans were eating 8.5 lbs. of margarine a year, about the same as butter. By 1976 margarine consumption had increased to 12 lbs. a year. Despite the switch from butter to margarine, the incidence of heart disease in the U.S. continued to rise. Even though continued studies showed that there was no relationship between dietary fat and heart disease.

In 1981 a group of Welsh researchers published a paper linking trans fats to heart disease. There were many more studies that followed all showing how decreasing trans fat would lessen the risk of heart disease. One Harvard School of Public Health estimated that 250,000 heart attacks and related deaths every year could be prevented by eliminating trans fat from the American diet. Studies during this time were showing that trans fat dramatically increase “bad” VLDP, the worst kind of cholesterol, and decrease “good” HDL, the helpful cholesterol. It is said that trans fats appear to increase the risk of coronary heart disease more than any other macronutrient. It wasn’t until 2006 that the FDA finally implemented its plan that required manufacturers of foods to list the quantity of trans fats on the nutrition label. So what can we take from this article? Many of the guidelines that we have been told, have more to do with ill-guided studies and special interest groups than what is truly good for our bodies. In this example, the American people were told that margarine was the heart–healthy alternative to butter when it was exactly the opposite.

Making even small adjustments to the foods you eat can make big changes to your health. Whole foods, meaning ingredients you can say and know where they come from, are always the simplest answer.